Six daytrips for your holiday in Croatia
Prev Next
Search

Croatia might not be as famous as its European counterparts for a ‘go to’ holiday destination – but there’s no reason why it shouldn’t be. Stunning scenery, a wonderful climate and an interesting history all make Croatia a perfect destination for travellers and holidaymakers alike. We’ve compiled a short-list of fantastic attractions should you need some day-tripping inspiration (if you can find the motivation to peel yourself away from the pool, that is…).

Nikola Tesla — inventor and electricity extraordinaire — was born in the village of Smiljan in 1856. His family house has been renovated to commemorate 150 years since his birth, and is accompanied by a number of exhibits and a museum. There’s also a futuristic playground for kids, if you’re looking for a family-friendly day trip.

The amphitheatre in Pula — known as the Pula Arena — is one of only three preserved amphitheatres in the world, and the sixth largest still in existence. Constructed in 27 BC – 68 AD, it is the best preserved ancient monument in Croatia — and remained in use until the 5th Century. 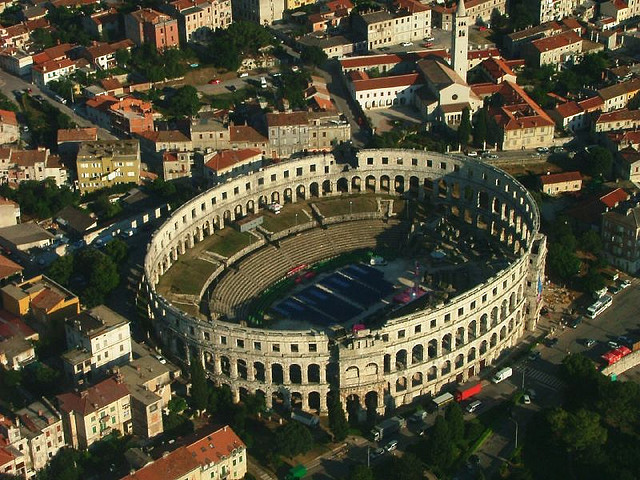 It’s the only remaining amphitheater to have four side towers and with all three Roman architectural orders entirely preserved. Nowadays, the space is used to for theatre productions, ceremonies and public meetings — including pop concerts and ice hockey games. We can only imagine what the Romans would say.

Located in Krapina, northern Croatia (about 45 minutes from Zagreb) is a museum dedicated to the discovery of around seventy neanderthal remains. The discovery was made in 1899, and the site has been named a ‘paleontological monument of nature’.

Although not as famous as Italy’s Pisa, the Croatian town of Zavrsje in Istria has it’s own leaning tower. The belfry in Zavresje is 22 metres high and tilts 40cm towards the north. There are some fantastic restaurants in the town, so it’s well-worth a day (or two) of exploring.

A trip to Dubrovnik wouldn’t be complete without walking around the city’s walls; encircling the city only takes around two hours. Constructed between the 12th and 17th centuries, they’re nearly two kilometres in length and reach a maximum height of 25 metres. The wall structure is one of the most well-preserved fortified walls in Europe, making it a popular tourist destination.

The old city of Dubrovnik — including a substantial section of the walls — has been a UNESCO world heritage site since 1979.

There are 70 truffle types in the world, of which half come from Europe. Whilst Croatia might not immediately leap to mind as a traditional truffle-producing country (the forerunners are Italy, France and Spain) — but Istrian forests have three sorts of black truffles as well as the big white truffle. In fact, the largest truffle ever found was unearthed in Croatia — discovered in 1999 and weighing 1.31kg.

If truffle-hunting sounds like a fun way of spending a few hours (or even a whole holiday, we won’t judge), the truffle-hunting season starts in October and finishes December. Best pack thermals, just in case.

Interested in venturing to Croatia this year? Check out our Croatian holiday accommodation — we have a fantastic selection of villas for you to choose from.