Florence: A guide to city’s events (January-June)
Prev Next
Search

Florence isn’t just a UNESCO heritage site filled with awesome architecture, incredible artworks and fabulous fashion; it has a pretty packed annual events calendar too. Whatever time of year you’re venturing to this fantastic city, we can guarantee you’ll find something on which will keep you entertained. In part one of a two-part blog series looking at Florence’s events, we’ve collated the ultimate list of festivals held during the first half of the year.

Celebrating the last official day of the holiday season, the city hosts the Feast of the Epiphany — comprising of the Procession of the Wise Men, an entertaining procession which culminates in a nativity enactment. The tradition of the procession dates back to the 1400s, where the Medici family partook in the parade.

Another — a bit more unusual — procession also takes place on this day; a vintage car rally that starts in the Casino park and finishes in the Piazza delle Repubblica (pictured below). As long as you’re in the main streets of the city, you’ll see the cars and motorcycles passing by. The event dates from the 1940s, where participants headed to the Piazza delle Repubblica to gift sweets to the helpful traffic police (who didn’t always have the reputation they perhaps have today).

Held on the anniversary of her death, this parade commemorates the life of Anna Maria Luisa de Medici — the last heir of the famous Medici family, and who gifted their art collection to the city. The procession starts in Piazza Signoria and finishes (aptly) in the Medici Chapel; both the Chapel and the Museum are open for free on this day.

Starting in Piazza Signoria, the procession then heads towards Piazza Santa Croce — where participants lay flowers at Michelangelo’s tomb — before venturing onwards to the house where he lived, in via Ghibellina. 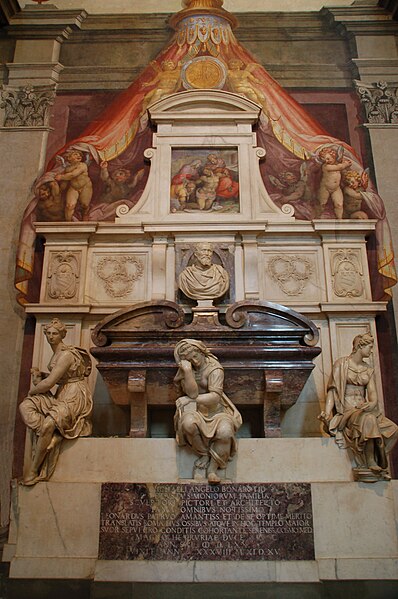 Until 1750, this day was the start of the calendar and nowadays festivities commemorate Mary being told by an angel that she would become the mother of Christ. A medieval parade starts in Piazza della Signoria and heads to Piazza SS Annunziata, where the celebrations continue with markets, live music and traditional local food.

The ‘explosion of the cart’ is an Easter day tradition which takes place in Cathedral square; a wooden antique cart is lead through the city to the Duomo, complete with marching band the and the Florentine Republic procession. At 11am, doves are released and fireworks are ignited — providing a unique display for bystanders. If you’re thinking of going, the cart arrives in Duomo square around 10.30 — so get there early for the best view.

Filippo Brunelleschi was the creator of the Cupola (the dome over the Duomo), who managed to engineer the logistics of crafting such a magnificent structure. He died on 16 April 1466, and the city commemorates this anniversary with a wreath laying ceremony and procession which starts at Palagio di Party Guelfa and ends at the Basilica.

The city celebrates this day with a marching band procession and open air concert; in the morning, the marching band, war veterans and city officials pay their respects to fallen war heroes at a wreath laying ceremony and then later that day an open air concert takes place in Piazza Signoria. Both events — understandably — get extremely busy, so be prepared.

This is a relatively new tradition where the shops and museums stay open late, there are street performances of dancers and musicians, DJ sets, food stalls, talks and showings which continue through the night and into the following morning.

Held every year, the flower show exhibits indoor and outdoor plants from horticulturalists who attend from across Italy. It can be found in the aptly named Giardino dell’Orticoltura — which also houses Italy’s largest greenhouse. If you’re travelling with kids, the gardens also boast a playground — should you find that they find the plants a bit dull.

A national holiday in Italy — and most of Europe — you’ll find that public amenities will be running a reduced service and the majority of the museums in Florence will be closed. However, there’s still numerous events in the city on this day — including the flag throwing contest in Piazza delle Signoria,

Every May, flowers are donated in honour of Girolamo Savonarola — a Domenican friar, who was hanged and burnt at the stake after being accused of being a heretic. Flowers are arranged around the circular plague in Piazza Signoria, and is followed by a procession to the Ponte Vecchio bridge.

As the symbol of the city, the iris flower is pretty important to Florence. Every May, the city’s Iris Garden holds a competition and crowns the flower which is either the prettiest or most original hybrid. The garden is open from late April, but Irises don’t bloom until mid-May (weather depending). Visiting is completely free, and we highly recommend it.

In 1946, Italians voted to become a democratic republic and this day commemorates this historic change of leadership. Florence celebrates with a wreath laying ceremony (in Piazza dell’Unità), flag raising (in Piazza Repubblica) and a procession and marching band with city officials and members of the military.

An annual tradition which dates back to the 1450s, this bloodthirsty sport is followed by the largest procession of the year (including the famous sbandieratori group — translation: flag-throwers). The sport itself is a combination of soccer, rugby, football and wrestling and is played in renaissance costume. The four teams represent each corner of the city and fight to win the match for their neighbourhood.

Celebrating the patron saint of the city, the festivities comprise of a glorious firework display over the river Arno. Head over to the north side of the river for the best view — its truly spectacular watching the night sky burst into life above the Ponte Vecchio bridge.

Inspired to travel to this fabulous city? Check out our accommodation in Florence.

The Ultimate Rome Bucket List: Top 30 things to do in Rome

The Six Top Beaches in Marche