Top 10 best towns to visit in Tuscany
Prev Next
Search

Known for its historic towns, rolling scenery and breathtaking coastline, Tuscany is one of the most popular tourist destinations in Italy, and arguably the most famous. It’s bursting with attractions and landmarks which dominate bucket lists, and the region is world-famous for its towns and cities. So – we’re diving into the towns we think are the best towns in Tuscany to put on your bucket list.

Florence doesn’t really need an introduction. It’s world-famous for its architecture, and has some of the most recognisable landmarks in Italy (the Duomo and the Ponte Vecchio bridge). You’ll undoubtedly want to tick both the Uffizi gallery and climbing the Duomo off your list; head the Uffizi early to avoid the crowds, before climbing the 463 steps to the top of the tower. To recreate the iconic panoramic landscape of the city, head to Piazzale Michelangelo in the Oltrarno district for the ultimate observation point of a city skyline which has barely changed in hundreds of years. 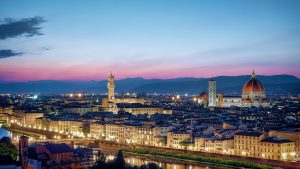 If you’re a foodie, head to either the San Lorenzo market or Mercato Centrale, both in the centre of the city – you’ll get a real sense of the freshest local products available before heading to the first floor to one of the cafes and bars which await.

If you fancy spending the day like a local, head to Santo Spirito where you’ll find fantastic coffee and wine bars and wonderfully authentic restaurants.

We recommend: heading to Cafe Gilli for coffee and breakfast – it dates back to 1733, and has a funky art nouveau interior with long marble bar

Siena is easily one of Italy’s nicest cities – located in the heart of Tuscany, it’s world famous for its art, museums and the Palio (a horse race held twice each year). The central piazza is known as Il Campo, and is dominated by the red Palazzo Pubblico and the tower Torre del Mangia. Head to the piazza for a coffee in one of the many bars there, or climb the 400 steps to the top of the tower – the surrounding countryside views are breathtaking.

The historical centre is yet another one of Italy’s UNESCO World Heritage Sites, and visitors will be spoiled for choice with landmarks to visit. It’s home to the eponymous Siena Cathedral, which is an incredible display of Romanesque-Gothic architecture (although was originally planned to be far more ambitious but war and plague put an end to these plans). It’s truly magnificent both inside and out.

We recommend: if you’re nearby for a week, head to Siena on a Wednesday – as its market day, and Siena boasts the largest market in Tuscany. It can get crowded, so head to La Lizza early so as not to miss out.

Inevitably, you think Pisa and you think leaning tower. Once you’ve taken the mandatory I’m-just-here-casually-propping-up-this-850-year-old-tower photo, it’s well worth climbing its 297 steps for a fantastic view. Whilst there, head to the Duomo (it’s next to it) and admire the wonderful renaissance interior. 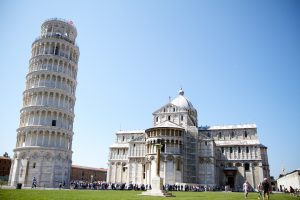 Whilst in Pisa, head to the National Museum of San Matteo – you’ll find sculptural masterpieces by Nicola Pisano and Donatello, among a range of artworks, illuminated medieval manuscripts, antique ceramics and religious sculptures from the 13th century. You can buy a joint ticket for the Palazzo Reale – another museum which houses some of the Medici family’s art collection – if you’re planning on doing Pisa over a few days.

We recommend: heading to GUStO al 129 – an unusual pizzeria which specialises in dessert pizzas as well as savoury ones. It can get busy (it’s really good), so book a table in advance.

A walled medieval hill town, San Gimignano is known as the ‘town of the fine towers’ and famous for its surviving medieval architecture – including the fourteen tower houses which make the town an unmistakable presence in the landscape.

Head to the Duomo to admire the painted frescos, before heading into the streets to explore the numerous artisanal shops tucked away just off the cobbles.

For the obligatory gelato pit-stop (surely it’s not just us who can’t spend 24 hours in Italy without eating gelato?), head to Gelateria Dondoli – the owner, Sergio, is a world champion in gelato-making. You can also spend a couple of hours learning how to make your own gelato as part of one of his gelato making classes (although they are only available on Thursdays).

We recommend: visiting Podere la Marronaia for lunch – it’s a small family-run vineyard and olive farm. They produce white, red and rosé wines as well as extra virgin olive oil (all of which are available for tastings).

Lucca is the perfect town for a wander; Renaissance walls enclave cobbled streets, medieval architecture and fantastic restaurants. For a birds eye view of the city, head to the city walls — you can simply walk or hire a bike to cycle round them. At just over 4 kilometers long and 30 metres wide, the sheer scale is incredible – they house playgrounds, cafes, and picnic areas – and you’ll get a unique glimpse into local life. 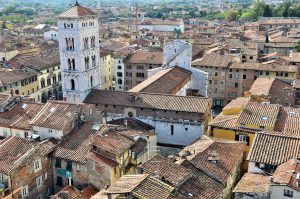 Perhaps best famed for its silk production history, Lucca – as with much of Italy – is also renowned for its wine and olive oil. Oil from this area is best used in salad dressings, or you’ll find it in typically Tuscan dishes such as bruschetta or soups.

For your cultural hit, head to Lucca’s very own Duomo (in the Cathedral di San Martino), and the Piazza Anfiteatro — an old Roman Amphitheatre, it’s now home to cafes and restaurants. It’s also worth climbing to the top of the Guinigi tower, where you’ll find a stunning panoramic of the maze-like city below you. If you have a love of horticulture, pop along to the Orto Botanico Comunale di Lucca — an expansive botanical garden, founded in the early 19th Century and have been beautifully maintained since.

We recommend: heading slightly south of the town, to the Acquedotto del Nottolini – the aqueduct was once used to carry water from the mountains to the city, and it’s a truly stunning feat of architecture snaking as far as the eye can see.

Montepulciano is a wonderful medieval and Renaissance hilltop town, sitting high on a limestone ridge and overlooking the surrounding Tuscan landscape. It’s the perfect destination to wile away the day, exploring the many streets on-foot (the town is pedestrianised) and taking in the numerous embellished churches and Florentine architecture.

You can’t not visit Montepulciano without sampling its ‘pici’ pasta – a thick, hand-rolled pasta made from flour and water and akin to a fat spaghetti. The region is also known internationally for its wine production; the town is surrounded by vineyards, and home to one of first Italian wines to be recognised as denominazione di origins controllata (DOC) – the Vino Nobile di Montepulciano DOC.

If you’re heading to the town in late August, look out for the Bravio delle Botti — an annual barrel race which takes place in the centre of the town on the last Sunday in August.

We recommend: booking a whole day wine tour – you’ll be able to visit multiple cellars and vineyards, with a wonderful lunch included in the heart of the the town

Volterra certainly packs a punch when it comes to ancient landmarks. You’ll find an incredible Roman amphitheatre – one of the best preserved in Italy – accompanied by the remains of Roman baths and forum. Head to the Parco Archeologico Enrico Fiumi, which is surrounded by the remains of the Etruscan walls built in the 4th century B.C. It’s worth seeking out the gates – there are six, of which Ports all’Arco is the oldest and most intact. 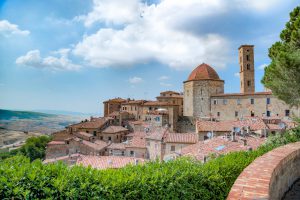 Known as the ‘city of alabaster’, you’ll find plenty of ornaments begging to become souvenirs. There’s also a museum dedicated to the distinctive stone, which tells the story behind the ancient craft – from its production to commoditisation. It’s also worth heading to the Guarnacci museum, which showcases a spectacular array of alabaster sculptures from the Etruscan era.

We recommend: book in advance to visit the Medicean Fortress (known as Maschio); it’s a high security prison which hosts sporadic open restaurant nights at the eponymous Fortezza Medicea

Perhaps most famous for its immortalisation in Under the Tuscan Sun, Cortona is a town often visited by travellers exploring this region in Italy. Like Volterra, Cortona is also a walled city with an impressive view over the surrounding valley and out towards Lake Trasimeno.

It would be a shame to visit Cortona without visiting the Etruscan Academy Museum of Cortona (MAEC); it’s one of the most comprehensive Etruscan museums in the world, and is continually evolving as new artefacts emerge. Many of the Etruscan artefacts were sourced in the nearby Archaeological park of Sodo.

Head slightly outside of Cortona and you’ll find the Monastery of Celle, which was the first monastery built by St. Francesco of Assisi in the early 13th Century – the monastery is still in use today, and visitors can visit the cell he lived in.

We recommend: visiting the Etruscan tombs, which are just outside of Cortona — there are several different sites to peruse

Believed to have once been one of the twelve most important Etruscan cities, Arezzo is now a vibrant town bursting with the obligatory art and architecture famed in this region of Italy. One of the wealthiest cities in Tuscany thanks to its gold-smithing heritage, you’ll find Arezzo at the crossroads of four valleys.

It would be amiss to visit Arezzo without climbing the Medici Fortress; once an intimidating five-point structure it now provides a 360-degree view of Arezzo and beyond. Constructed between 1538 and 1560, the fortress showcases its architectural evolution over the succeeding years as well as explosion damage from a partial dismantlement in the 19th Century.

One of the quirkier events hosted biannually is the Saracen Joust — the tradition dates back to the 16th Century, when the jousting was utilised as part of military training. Nowadays (thankfully for spectators) it’s purely ceremonial. 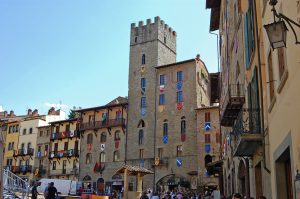 We recommend: visiting on the first Sunday of the month for the vast antique fair held in Piazza Grande, followed by a bite to eat in one of the numerous cafes and restaurants nearby (although if the dates don’t align, you’ll still find plenty of treasures in the surrounding shops all month long).

Proud bearer of the European City of Culture epithet in 2017, Pistoia is an enchanting town with modern art, medieval city walls and a vista to rival Florence. The area is known for its plant and flower cultivation, with the town hosting impressive flower markets (if you’re early enough!). The area is also known as the ‘Tuscan chocolate valley’, which means you’ll find some of the most incredible chocolates in Italy in the town. Head to Bruno Corsini dal 1918 or Le Dolcezze Pistoia in the town centre for that cocoa-hit.

We’d happily argue that the cathedral’s bell tower is one of the most striking in Tuscany (pun intended); you’ll find the cathedral in the Piazza Duomo in the centre of the town. As with Florence’s Duomo, you can climb the 200 steps of the campanile to view the town juxtaposed against the Apennines. You won’t be disappointed.

We recommend: heading slightly out of the town and into the province of Pistoia, and to the thermal baths of Montecatini and Monsummano — the restorative waters have been frequented by royalty, nobility and movie stars thanks to their believed health benefits.

Feeling inspired? Check out the holiday accommodation we have available in Tuscany >

Itinerary: One week in Le Marche